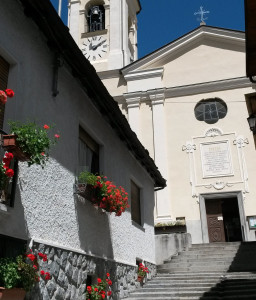 Fenestrelle is a small village at 1150 meters above sea level nestled among the mountains of Alta Val Chisone, in the province of Turin, 22 km far from Sestriere.
The name comes from “Fines Terrae Cotti” and it means “the end of the lands of the Celtic king Cozio”, a sovereign ally of the Ancient Rome and who lived in the first century B.C. ..
The town therefore has a long history. It was born as a settlement of ancient independent tribes and in Roman times it was an important military garrison and a well-known trade center outside of Gaul. In the Middle Ages it was the seat of feudal lords who ruled the territories of the upper valley, until the conquest of the Kingdom of France.

French citiy until the Treaty of Utrecht of 1713, Fenestrelle houses many buildings that recall that period. Among the best preserved examples you can see the old Jesuit convent, built in 1656 for precise religious functions. The main facade of the building, carefully restored in recent years, presents typical decorations of the French Baroque, which can be found above the entrance portal of the parish church of St. Louis IX, built in the eighties of the seventeenth century by order of Louis XIV . Inside the church, besides the stucco and late Baroque decorations, the nineteenth century pipe organ deserves to be admired and it’s among the best preserved of the Pinerolo area. 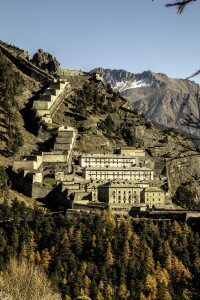 Continuing the visit to the “French Fenestrelle”, you come across a system of fortifications present in the city long before the Savoy interventions. The city of Fenestrelle was in fact surrounded by a circle of walls difficult to date, but the architect Vauban describes it in his visit at the end of the seventeenth century.It still retains a portion of the walls around which a path twists and turns,  leading the visitor from the ancient Via Umberto I to Porta Francia, one of the oldest entrances into the town. A collaborator of Vauban was responsible for the design of the fort Mutin located on the side of the stream Chisone and which can be visited through a guided tour that enhances its interesting pentagonal shape. Around the middle of the nineteenth century, now unused after the conquest of Savoy in 1708, it was partially demolished. Today its ruins are still rich in suggestion, since they have structural elements of particular interest and essential French military architecture. A path rising from the fort Mutin leads to the ridotta dell’Andourn, an additional defensive element of the city of Fenestrelle, situated at the top of the mountain that overlooks the city. From this fort, the fort of Fenestrelle, built starting in 1727 and designed by Ignazio Bertola for King Vittorio Amedeo II of Savoy, and still perfectly preserved, can be seen in all its glory.

The Fenestrelle fortress consists of three fortified complexes: San Carlo, Tre Denti and Delle Valli, joined by a tunnel where there is the longest covered staircase in Europe, with about 4,000 steps. Because of its impressive size of 1,350,000 square meters and a length of 3 Km distributed over 650 m in altitude, the fortress is known as the Great Wall of Piedmont and has become the symbol of the Province of Turin.

Thanks to its abundance of historical artifacts related to the French military history and Savoy, Fenestrelle is included into the category of fortified cities, opening the possibility to guests to fully enjoy the architectural and natural heritage, which is accessible to all lovers of history and mountain.

A inseparable duo for lovers of this city.