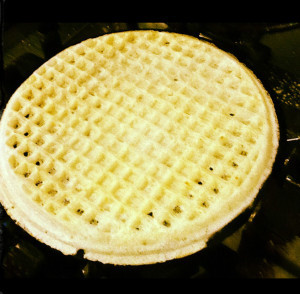 GOFRI – Gofri are waffles made of a thin and crispy dough containing only three ingredients: water, flour and yeast. They are circular in shape, patterned with typical honeycomb design imprinted across the surface  and have a neutral flavor that goes perfectly with any type of filling, sweet or savory.
Gofri are the most typical of local street foods, enjoyed with ham and cheese or spreadable chocolate cream.
The original waffles and special stoves for cooking them can be found only in the villages of the valley Val Chisone, where once the gofri was a basic component of the rural meal.

CALHIETTE – Calhiette are potato balls flavored with bacon and fried vegetables and served with Alpine toma cheese or melted butter. They are a typical dish of the Occitan tradition, proposed in many local restaurant and strictly hand mixed. 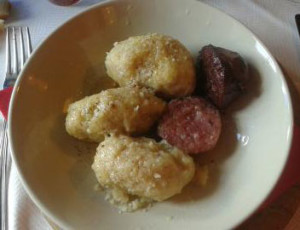 SALA’ POTATOES – The original recipe of salà potatoes requires that this dish is cooked on the wood stove (putagè) in a cast iron pot with high sides called “brunsa” because in the past it was cast in bronze. The base of this dish consists of the famous mountain potatoes, intense and special in flavor, accompanied by cooked salami or a slice of bacon. As the local saying goes: “Patate salà, salam e salada a l’è l’disné ‘d la valada” which means “Salà potatoes, salami and salad constitute the lunch of the valley.”

GLARA – Glara is a pie of grated or sliced potatoes and cooked in a wood oven together with milk, eggs, cheese, bacon or diced bacon and onion. 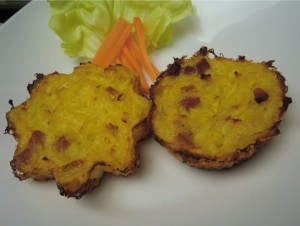 PLAISENTIF – The Plaisentif or cheese of violets is a particular toma cheese that is produced in the mountain pastures of the high Val Chisone. It is produced from the milk of cows in the first pasture, then milked in the period between the ascent of the June pasture and not later than 30th  July. During these months the animals feed exclusively of local flora rich in flowers and herbs. It is also called cheese of violets because the grass of the first pasture coincides with the period of flowering violets.

After at least a 60-days aging the cheese is ready for sale, which takes place exclusively from the Historical commemoration Poggio Oddone – Terra di Confine e Fiera del Plaisentif  Fair of Plaisentif held in Perosa Argentina every year on the 3rd Sunday of September. Only marked tomes can be called “Plaisentf”, registered trademark.
On the left bank of the valley Val Chisone a path was traced connecting the various villages where most typically cheese is made. 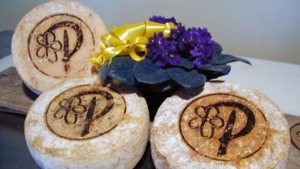