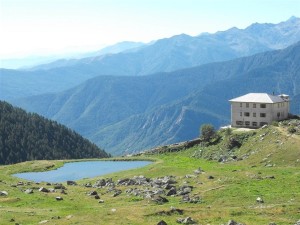 From 7.30 p.m. approximately, in the Old Town of Fenestrelle, stands and long tables are positioned for offering the opportunity to taste the traditional local dishes, such as polenta and sausage, mountain cheese, gofri, calhiette, glara, salà potatoes cooked salami and homemade desserts. The evening is enlivened by the traditional Occitan music, dancing and singing.

parade and exhibition of Bal da Sabre, which in the Occitan language means “dance of the swords”, permormed by the folk group composed of the Spadonari (“men with sword”) of Fenestrelle and the women’s group.

During the day, the Bal da Sabre group distributes blessed bread during the Mass and then performs the typical choreographic representation of Saracen origin, which recalls elements of nature like the sun, the heat and the seasons. Dancing, the Spadonari form a chain with swords, with the incessant sound of the drums. They perform figures called “roses”, “braids”, “reel”, without ever dissolving the bond formed by the swords.

During the week of this feast you can see the traditional football game, participate to the pop-dance music concert and games for children and taste the typical gofri.